“Münchner Kammerspiele should be a laboratory for future urban societies.”

It’s politics before you can draw breath at Münchner Kammerspiele.

About halfway down one of Munich’s fanciest shopping streets, the Kammerspiele has long played a key role in the city’s theatre scene. I’ve come to meet Anne Schulz, the theatre’s Referentin für Publikumsarbeit (the person responsible for connecting with audience and curating the theatre’s community and education programme). “There’s a demonstration about the new police powers just started. Do you mind if we go?” she says as we meet. We walk over to nearby Odeonplatz, chatting about the political landscape of Munich en route.

The 2017 elections saw an unsettling shift towards the right in Bavaria, with the extreme right-wing party AfD gaining influence. The same state parliament that has just increased the police powers, is now also requiring all public buildings to display crosses as a reinforcement of ‘German’ culture. And at the national level, Munich’s Horst Seehofer, on becoming Interior Minister in the current coalition government, has changed the name of his ministry to include the controversial word, Heimat, an emotive notion of homeland, a word to swell the German heart. “It can be all sorts of things” says Anne, “a smell, a feeling, a flower – a sense of belonging. But it can also easily become an instrument of exclusion.”

Over the past 3 years, since the city appointed Matthias Lilienthal as the Intendant (Director), the Kammerspiele has moved in a more political direction, considerably broadening its social base and, amongst other things, welcoming refugees with open arms and reinventing itself as a “Welcome Theatre”. But despite the fact that many new people have been coming and the theatre has been buzzing, the city recently announced that they won’t be renewing Lilienthal’s first contract when it expires in 2020. The reasons aren’t really given but, “the move speaks volumes,” says Anne ruefully, “the last director, Dutch theatre maker Johan Simons, had already opened things up towards international artists. Matthias made even bigger moves towards transculturality and interdisciplinarity and it’s clear that this has been a challenge for audiences. As a publicly-funded theatre, it’s our duty to push the limits.”

Back in 2015 Lilienthal, previously the Intendant at Berlin’s leading independent venue, Hebbel Am Ufer (HAU), with ground-breaking international projects like X Wohnungen/X Apartments to his name, came to Munich with a great vision ‘to turn the theatre into a place for the future’. A vision that encompassed experimental and international programming exploring different aesthetics and cultures as well as a determination to broaden the audience appeal to include absolutely everybody.

And at the core of the vision was the notion of transforming the Münchener Kammerspiele into the Munich Welcome Theatre, open to, and for, everybody and anybody. Engaging with as many people as possible whatever their backgrounds and previous experience of theatre – heading out of the black box into the city, as well as bringing more of the people of Munich back in. “The whole organisation needed to embrace this,” explains Anne, “the ensemble became much more diverse with lots of different languages spoken on stage and we introduced English surtitles in Kammer 1. It’s got to come from the top this sort of change, to bring everyone on side and then run it throughout the whole organisation. We get a lot of funding and Matthias felt that we had a duty to tackle relevant issues and aesthetically cross borders and try new things. Content-wise, he wanted to go to the very edge.”

So it all kicked off with The Open Border Congress in October 2015 – a programme of all sorts of activities setting out a stall of intentions. “In every room we had a presentation, a lecture, a discussion, all around the topics of migration, flight and arrival” says Anne. “While preparing the congress in early 2015 we were not aware that it would become the burning issue and that tens of thousands refugees would arrive at the Munich train station that summer.” And it all went on from there. Asking questions: ‘How can refugees and non-refugees act together? Which borders do we need to change to create an open and culturally diverse society?’ Next, came the Welcome Café, working with volunteers and bringing refugees and locals together in activities and creative workshops.

“It was really good,” Anne smiles, “All these little initiatives were started – a German class here, a women’s group there, a film festival, Kino Asyl – and they came together to make this fantastic whole. We started offering free tickets to refugees. And then we set up the Open Border Ensemble. We got some money to hire 4 actors and a producer (Krystel Khoury). We held two big workshop sessions, one in Beirut to meet people in Syria and one here for the people already in Europe. The Ensemble is involved with several projects as well as two core productions exploring how we use direct experience in theatre. The first, Miunikh-Damaskus, aims to deconstruct stereotypes and is collectively written by the company together with German director, Jessica Glause, based on experiences drawn from interviews, stories, etc, so the Syrian voice is clearly embedded. The second, What They Want to Hear, with Argentinian director, Lola Arias, is still in rehearsal – a more narrative documentary style focussed on one refugee’s extended experience of the German asylum system.”

“In addition to the performances, we want to establish a network; This weekend, we’re hosting a Post-Heimat Work Meeting to connect to the other theatres and companies in this field and explore the next steps”. Anne and I talk a little about what stories you tell and how you keep the audience engaged. As Milo Rau points out with his production, Compassion: The History of the Machine Gun, compassion fatigue is eventually inevitable. And we have to look beyond the bald facts of events, however appalling. What matters in the long run is that we bring everyone together as human beings. Sharing outlooks, mixing cultures, celebrating difference. “The balance between international avant-garde theatre on the one hand and accessibility for everybody on the other is quite challenging”, Anne observes.

So how effective has it been? Has the theatre reached out beyond the bubble? Can it help to move people beyond this fear of inevitable global change, beyond the rhetoric, so that they can find a way through without the hysteria? Anne considers, “The welcome context has really worked – we’ve definitely widened the audience. It has become younger and more diverse. There’s lots more students, politically engaged people, expats, social workers, all sorts of people who never came before. The theatre’s reputation was quite elitist, and we’re slowly trying to change this.

“We’ve done the obvious stuff – social media, ticket offers – students can visit as often as they like for €80 pa with the Kammerflat. We’ve got kids talking to their parents about what they’ve been doing here, encouraging them to come. We’ve tackled subjects of interest to the wider community and brought in new approaches. We’ve got a Curator for Music and Discourse now. We’ve done a lot of work dealing with racism – workshops, plays – our production, Mittelreich (a German play was copied with an all-black cast) played to the most diverse audience we’ve ever had. We did a piece, Luegen, exploring how we communicate with the added dimension that one of the actors was deaf and using sign language. We brought in a dance company from Chad with their documentary piece – Waignedeh/Morgen. Accompanying the performances, there were talks and a book presentation. The choreographer Taigué Ahmed and his dancers also did workshops with local dance professionals as well as refugees. It gave people that broader context – we could reflect on life in Munich whilst engaging with the experiences of others. It’s wonderful when you can connect everything – the artistic work, the discourse and the educational approach. That’s a complex package – that’s what makes me totally happy!”

“There’s always discussions around the shows, debates and events about local issues,” Anne continues. “We mix it all up – a play in Kammer 1, music in Kammer 2, a diverse youth club on a rehearsal stage, and everyone’s invited to come together in the canteen afterwards, we even sometimes cook together whilst we chat during the event ‘Tischszenen‘ (table talks). And most artists we work with are interested in these participative formats too – we had a Klima Konferenz by Rimini Protokoll with public role play and saved the world, albeit for one night only! I think it’s important to work on the diversification of the institution at all levels at the same time: not only the programming, but also the staff and the audience. And easy access is a ‘must-have’.”

And in connecting to this community, how did you get to know them? Anne smiles, “At the beginning Matthias and I did about 40 home visits. We put out a call to the city. If someone could get a group of 10 interested people together, we’d go to meet them in their homes – wherever, whatever, big villas, tiny flats – and talk with them about what they liked, what they wanted their theatre to be, sharing our programme ideas with them. Lots of people were curious and it really connected. And we’ve kept it going with the cooking event – bringing people together to cook and … talk. And from that we connect. And learn. And grow. Together.” 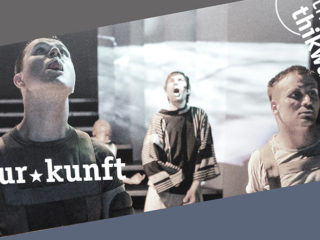 Next Project (n) ur.kunft : a show