“We are building up to a collision of worlds.”

It starts with dancers, dark shapes scaling the stage, like dream fragments coming home to roost. The stage is someone’s home where a group of friends have gathered. One talks about the rise of a new right-wing. Populism, nationalism. The dancers shimmer in and out of shadow, is this how fear moves? Images of present-day Nazis loom on screens, images of chaos, meltdown. The stuff of nightmares.

It’s a comfortable middle-class place, this home. Soft singing, someone strums a guitar. There’s a garden. The characters laugh about their softness: “We want our kids to wear crash helmets on the swings.” But what crashes into this bursting bubble is the nightmares. The sense of being dragged into the heart of darkness. Perhaps it’s necessary to enter the darkness to understand our fears.

Cue dancers and ghoulish face paint. The rise of the zombie right, played as parody here, but it’s laughter inflected with unease. The writer/director, Falk Richter, is quoted as saying that Fear is dealing with the recent shifts in our European societies, “I am interested in how our political and economic system is affecting the way we live and work, move, think, feel and form relationships.”

And what can theatre do? “It can bring these issues to people’s attention. It can give the audience a chance to see things from many different angles. We are building up to a collision of worlds.”

This new far-right in Germany has grown partly out of reaction to the opening of the borders in 2015, whipping up a storm of worries. Richter started to feel concerned  earlier than most and he wrote Fear in response, not as a fully formed argument, more to take a reading of where things stood.

Part-improvised, the play collages different media – dance, video, music, theatre. And mixes in found material, documentary material – right-wing speeches, video footage of rallies and closeups of the key players – driving home the point that this is really happening. Ideas are harshly juxtaposed, this extreme world is hardly a place of fine nuances.

The cosy domestic middle class world of the home on stage presents a stark contrast although self-reflection and thus nuance are also lacking here. Don’t these comfortable liberal people also need to take a long hard look at themselves in attempting to unravel the mess? Isn’t it all a bit too comfortable? Don’t we need to  talk about the difficult stuff – borders, ethnicity, about class and wealth. And more to the point, the lack of wealth and the long-ignored austerity of so many people in so many places. Richter presents us with a hyper-real spectacle, but isn’t he also prescient to a point where we should be scared? Another kind of fear. Europe is sleepwalking and its not at all clear when or if we’ll ever wake up.

Then the killer punch. The final scene, an imagined future, when the feared right-wing coup has arrived. A man on the phone, frantically calling his family… he can’t get out, can’t get to see them, doesn’t know what to do next…

As we leave the theatre, we look up into the stars above Berlin, and feel the claustrophobia of history bearing down on us. 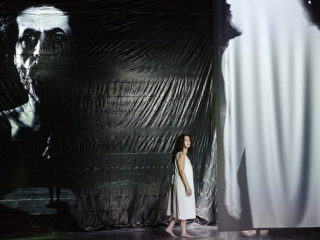 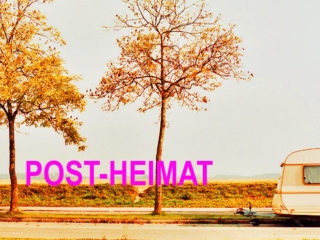 Next Project (n) Post-Heimat : a meeting