“…commited to international contemporary drama that negotiates the urgent themes of the moment.”

The website of this illustrious German theatre whose name is synomynous with that of the great Bertolt Brecht, says that in 1954 when his Berliner Ensemble company moved to its current location at Schiffbauerdamm, the 32 wheels of the new stage revolve came from a Soviet T-34 tank – a gift from the newly established East German regime. A vote of confidence and recognition of the political value of theatre perhaps. Although maybe not quite as the State intended – back in the old ‘East’, people regularly used theatres as their main place of subversive communication and idea development. Certainly, this building has witnessed some extraordinary moments with directors like Helene Weigel and Heiner Müller as well as Brecht himself. Since September 2017, it sees a new direction with incoming Intendant, Oliver Reese, and ‘a commitment to international contemporary drama that negotiates the urgent themes of the time.’ Drama that currently includes work from the UK, America, Norway, France and Congo.

One of the people that Reese has brought in is Dramaturg, Sabrina Zwach. Previously Head of Press & PR at Berlin’s Volksbühne, she went freelance for a while to work with the famously energetic director, Herbert Fritsch – “it was unbelievable for a decade, but exhausting,” laughs Sabrina when we meet. “We went everywhere, occasionally dipping into opera, exploring text and pushing language to its limits. We took Fluxus artist, Dieter Roth’s Murmel, Murmel to Edinburgh, Japan and many other countries. We worried about everything – the language, the cultural differences, the expressiveness of Fritsch’s actors. But it always worked because of its special kind of humour and its clarity. Fritsch is a traditionalist but he reinvents to be absolutely modern and this helps to cross cultures.” And, having subsequently attended Fritsch’s Der Die Mann at Berlin’s Schaubühne giving primary-coloured dynamic life to Viennese 1950s experimental poetry, I’d really agree.

So now, what’s the vision for this new Berliner Ensemble?

“Being in at the beginning of this new phase offers a great opportunity to reinvent this very established theatre and take it in a new direction. That’s very exciting” says Sabrina. “We want international work to be part of that, but of course it also needs to make money and the permanent ensemble and programme at home must still function. There’s always a way – we went all over the world with the Volksbühne – South America, Asia, France, Mexico, the big festivals.” In April, The Caucasian Chalk Circle went to Istanbul and there are rumours of an extended tour of an English-language version of Gunter Grass’ Blechtrommel (The Tin Drum), a one-man show directed by Reese with an extraordinary performance from ensemble member, Nico Holonics as Oscar Matzerath.

“There’s also a lot of scope to explore Brecht’s actual life and the things he stood for personally and politically, much of which really speaks to the moment,” adds Sabrina. “Previously the focus has always been on his works. I’ve recently acquired Helene Weigel’s car and am planning a project around this – maybe use it as a mobile stage…” This subsequently became the focus of a show in collaboration with KW, one of Berlin’s major contemporary galleries. Based on Brecht’s Man Equals Man, and presented in a Berlin car workshop, the piece explores the nature of labour.

“One of the first things we did was to introduce English surtitles,” Sabrina continues, “Thanks to Netflix and a shift away from dubbing in other film & TV, home audiences are happier to deal with them. And it’s much better for the Brecht tourists and expat theatregoers.”

And Sabrina’s key concern for German theatre now? “More than anything, we need good quality contemporary writing,” she says. “Sure, we’ve got the big names like Elfriede Jelinek, Falk Richter et al, but we really need to prioritise getting some new blood in, from Germany and further afield. There used to be a good balance between the big plays of the Staatstheaters and the riskier radical new work of the Freie Szene. The latter has suffered funding cuts because of all the increased accountability. The funders have a lot more control these days and many theatres are tending to play safe. But as experimentation fades, it gets harder to find refreshing extraordinary work motivated by politics or artistic experimentation. Many avant garde practitioners are now being absorbed into the Staatstheater system; which offers better resources but kills innovation. So it ends up being the same 10 groups touring and a lack of diversity across the piece.”

We talk about audiences. The average German profile is similar to the UK – middle-class, middle-aged, predominantly female – and currently that’s how it is at the Berliner Ensemble too, albeit with the added dimension of Brecht tourism. So here too, the eternal question of broadening that base, getting beyond the theatre bubble, the converted. “Exactly.” Sabrina agrees, “If you only have a homogenous audience reading the same papers, the same books, seeing the same TV, thinking the same thing as you, it’s hardly going to change the world. Sure there’s social media but I don’t think it really provides the answer, it’s about what you actually do. It has to resonate with people. To connect. And then reconnect.

“So we need to explore the things that matter to people – from the big concerns affecting our society – political shifts, Trumpismus, gender, immigration, and so on – to more local issues.” One recent project Sabrina’s particularly pleased with looks at the hot topic of gentrification in Berlin. Which brought in lots of new people, some of whom have returned to see other things. In October there’ll be a focus on Gender – a programme including British playwright, Alice Birch’s Revolt. She said. Revolt again and a new commission from Austrian Marlene Streeruwitz, Mar-a-Lago as well as lots of opportunity for public debate.

“One of the most interesting audiences was at the Volksbühne” continues Sabrina, “it ran along the lines of the old ‘East’ theatres. The vision was ‘we will be the revolution, der Widerstand. Originally targeted at workers, it was there for everyone – no memberships, cheap tickets, everybody welcome. Lots of people came 2-3 times per week. Young people everywhere! It was the place to be and there was all sorts happening – techno raves, poetry slams, films, discussions – plays obviously. People turned up at the Kasse (box office) saying: ‘1 ticket’. ‘For what?’ ‘Doesn’t matter, anything’. It’s clearly a very good model!”

The person primarily responsible for this great success story was director, Frank Castorf, but last year, the City Council ejected him and replaced him with Tate Modern director, Chris Dercon, with the aim of internationalising the Berlin theatre offer. Which has led to absolute uproar, sustained community protest and latterly Dercon’s resignation, leaving this much-loved institution in total chaos. All of which begs a question about the extent and wisdom of political intervention in the Arts.

As the new Berliner Ensemble is demonstrating, there are more organic ways to internationalise. And it’s certainly one to check out for anyone interested in international collaboration – the 2018/19 publicity campaign sums it up nicely: “Berliner Ensemble: it’s the place to BE”. 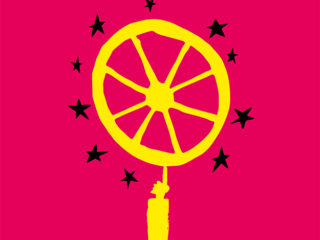