“We are the people who don’t belong. But we have been here over 600 years!”

Exuberant and angry, with constant restless movement, this mostly Roma company bare their hearts, forcing us to sit up and pay attention. A fearless provocation, truly a howl, this is a company that wants change to happen. Now.

A lone bearded man in a long glittering dress wails a lament from 1930s Berlin, calling to mind Cabaret and all those people murdered by the Nazis because they didn’t fit. He’s Roma, he’s gay, he tells us. He was born in Sweden, like Zarah Leander, the woman who sang that song all those years ago, in another age…  He brings on the rest of the cast. Also mostly Roma, from all over Europe. Two sisters from Serbia, one ultra-feminine and divorced, the other fiercely lesbian, a young mother from Romania decrying the Roma custom of marriage for 12-year old girls… as diverse as any group, all within this political identity. This Roma. Simply demanding acceptance. After all, “what we have in common is our diversity.”

The show progresses as a series of sketches. Not a historical overview, more personal histories, the things their mothers wanted them to say, or rather, didn’t! Accounts of appalling experiences of friends and families. Some so brutal they were hard to hear – stories of institutional incarceration, forced sterilisation, sexual abuse, the shame that so many bore in secret. And not just at the hands of the gadje (non-Roma) – the problems of their own community, the strong women bringing up children while their men womanised and shirked responsibility, the under-age marriages…

A story from Riah, whose family had lived for years in a small village in southern England. Bonfire Night. 2002. Flames flare up across the stage. That summer there’d been travellers camped nearby. There were issues and they’d been evicted, but the following November the villagers made an effigy of “a life-sized gypsy caravan with children looking out of the windows”. And burned it on the village bonfire. Riah’s mother complained, went to the media and was ostracised for her trouble. The following year, she was the effigy…

The Roma Army take the stage. Pushed to the point of revolution, they fire off guns. Bang. An actor drops dead. “She calls herself gypsy I don’t like it” Bang. That’s the director gone. “Another gadje putting words in our mouths.” Bang. “But I’m your sister.” Bang. Silence – so much for violence. A song. Full-throated, in this beautiful ancient language, resonating around the room. A vision from the future, “We have a disappeared history but there will come a time when you beg us to remember.” And finally, we’re home. But they’re not, they never will be: “We will roam.”

This show was part of a programme around Roma identity at Berlin’s Maxim Gorki Theater. Devised by the Gorki’s resident director, Yael Ronen with the cast of mostly Roma actors, the idea had come from two Roma actors and activists, the Selimovic sisters and grown from there. An exhibition of the work of British Roma artists, Damian and Delaine Le Bas was presented in the foyer, there were also post-show discussions and workshops and then a few months later, the Roma Biennale was inaugurated, commencing with a march along Berlin’s famous Unter den Linden. Gathering for the march by the Memorial for the murdered Roma and Sinti peoples by Berlin’s Reichstag, we were struck by a stark reminder of where prejudice can lead.  A peaceful pool, a stone triangle at its centre and a heart-rending poem lettered around its rim, the stones of the surrounding path were engraved with the names of the concentration camps where the Nazis murdered more than 500,000 Roma and Sinti people, more than half the European population at the time.

Gorki reminds us of the words of Hannah Arendt: “The community of European peoples went to pieces when – and because – it allowed its weakest member to be excluded and persecuted.” 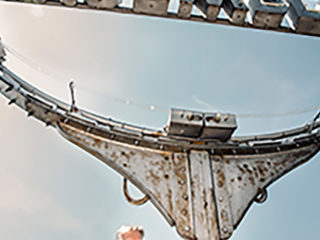 Next Project (n) Theater an der Ruhr : a conversation