A mixed ability company that “shows the creative wealth from being different.”

Bremen has a long tradition as a theatre city. As well as the Staatstheater, Theater Bremen, there’s theatres for dance, music, variety, community and even the Krimi-theater, running Hitchcock and Agatha Christie plays. And it’s the place where the Vier Stadtmusikanten (Four Musicians) – a donkey, dog, cat and a rooster, discarded and looking for a home – found their place. Look it up in the Brothers Grimm.

It’s also the home of the remarkable Blaumeier-Atelier, an inclusive arts organisation that emerged in the wake of psychiatric care reform in the mid-1980s. The aim was to enrich the lives of people with disabilities through supporting them to live within the community rather than being shut away in remote institutions and the City of Bremen trail-blazed the idea in Germany. It was only a matter of time before some of these new citizens wanted to explore their creativity along with their freedom, and so Blaumeier was born. A place where being different is the rule and everyone connects through mutual appreciation regardless of disability or not.

Blaumeier is housed in a collection of buildings clustered around a cobbled courtyard. Inside, are rehearsal studios, artrooms, photography spaces and a theatre, all bursting with creative vitality. I’m in their bright airy café, talking with three of the company – Alfons Römer-Tesar, Viktoria (Viki) Tesar and Barbara Weste.

“Right from the beginning it was always about creativity. People with disabilities came with their carers so everyone pitched in together,” says Barbara, “we don’t ask about your disability at Blaumeier. You don’t have to have one to come. Everyone can find their place.”

“And it tends to be the carers that have issues about doing Art,” adds Alfons, “they’re more concerned about what others will think, setting up comparisons.”

Barbara continues, “When you’re in psychiatry you’re confronted all the time with your weakness, so art is an escape. The actors have had a lot of difficult experiences but they can build their confidence here and that expands into other parts of their lives. One actor wanted to come to Blaumeier so much that he overcame his fear of going out alone.”

Alfons trained as a fine artist and discovered Blaumeier in 1990 as work experience. He stayed for 25 years, developing the art school and touring exhibition programme. “The artists received training and advice so that they became professional, something more than outsider artists with a raw vision.” A couple of years ago, he handed this over to a couple of young artists so that he could focus on the organisation, developing the company and finding new money.

Viki is a founder member. Back in 1986, fascinated by the possibilities of making art and theatre with the people who had emerged from the psychiatric hospital, she was keen to create a supportive environment for and with them. And apart from a few years training as an actor in Paris, she’s stayed, acting and guiding the work. “Here, they’re using the possibility of what they have, not trying to control,” she says. “They tend to feel what kind of space it is. The stage is a world full of possibility.”

And Barbara came for one year to cover when Viki went to Paris and found she just couldn’t leave! “I’d had no experience of theatre by people with disabilities, but I became completely obsessed,” she laughs. “We built up projects, experimented with an ensemble – every day was so different.” And all the while Blaumeier kept growing. The acting ensemble became permanent. The first theatre show Carmen, played to the public in 2004. And in 2010, another director, Imke Burma, joined the company, and together she and Barbara evolved their directorial practice, pushing the form more and more.

Blaumeier regularly develop new shows and play about 50-60 theatre performances, choir concerts and exhibitions to audiences each year, in their own theatre but also in different venues around the city and further afield, sometimes working with partners. There’s nearly 100 trained actors, working in six groups across different shows. The core ensemble recently staged a production of Der Sturm (The Tempest). “We’d been doing a lot of funny shows and wanted to try more serious work,” says Barbara, “but this had to be carefully chosen. We tend to take well-known stories, so the audience can follow the narrative whilst we build the show around the dramatic line with music and movement finding new elements in the work. Der Sturm had the spirits, characters the actors could put their own stamp on and so much scope for music.”

Music is always very important, as is dance and movement. Masks for which the company is justifiably famous, are often used, and sets are produced in-house. During rehearsal there’s a lot of discussion and improvisation with the comments and experiences of the actors incorporated. More recently, the actors wanted to try a new direction, something that connected more closely to their own experience. So, the current show, Rauschen (White Noise), is a devised piece led by the actors and based in their own experiences and frustrations. The two directors take a back seat, mostly functioning as mirrors through the process. And every show is different as the actors improvise and change the running order for each performance.

This change of approach chimes in elsewhere in this field. There has of course, been much discussion about total inclusion so that the work of actors with disabilities is equally valued as part of the mainstream. An increasingly asked question is: ‘where are the writers, directors, choreographers and set designers with learning disabilities?’ Zurich’s Theater HORA have been exploring the possibilities around direction with their project, FreieRepublik HORA. As have Berlin’s Theater Thikwa and other companies. “Yes, but it’s not political here” says Alfons, “The future direction comes from the work, a moment in the ensemble.”

Jonas Höhne from RambaZamba, another inclusive company in Berlin, has written about actors with learning disability: “Their imagination, their special expression…fills an empty space in our thinking, creating ideas, images and scenes that would not exist without them.”

The exhibitions travel easily and have been all over, the mask workshops likewise. Blaumeier’s director, Andrea Herbst, has done workshops in Russia, South Africa, the UK. It’s more complicated with the shows mostly because of the human logistics, and inevitably, money. Language issues can be addressed – Der Sturm has just returned from a visit to Moscow, where Imke, the director, used the surtitles to summarise the story rather than have the distraction of a direct translation. This worked well, leaving the audience free to respond to the actors and feel their own way through the play. But the actors also have their own lives and funding is short. “We don’t have full-time paid actors like some companies; most of our actors also have other jobs,” says Viki. “When we tour, they can only leave Bremen for 7-10 days at a time. So we have to find ways that work for everyone involved.”

And what of the future? “We’ve developed a special team – The Future Group!” laughs Alfons. “The most important thing right now is to look to the next generation, to keep it all alive.” Most of the staff joined the company about 20-25 years ago and will be retiring soon. Several younger artists have recently joined the company and are taking the work in their own way. “It’s up to them,” says Barbara, “keep the spirit, the liberty for the actors and painters. Everything else can change. And for now, we all work together.”

And the current political shift in Europe is having an impact. When I was talking with Imke Burma at Grenzenlos in Mainz (just before the elections) she talked about a disturbing conversation with the right-wing AfD. “We’ve done a lot of social inclusion here, Bremen’s where these reforms started in Germany” says Viki.

“It depends on perspective – the view from Moskau is that Bremen’s pretty good, but from here, we can see that things are slipping a little – there’s not always so much respect on the Straßenbahn (tram system). Inclusion in the schools is getting more difficult because of money” adds Barbara, “so Blaumeier becomes vital in this situation. Our focus has always been artistic. Now we must also become more political.”

Alfons has the final word: “What really matters is that Blaumeier continues to be seen by the public and that we show the creative wealth from being different.” 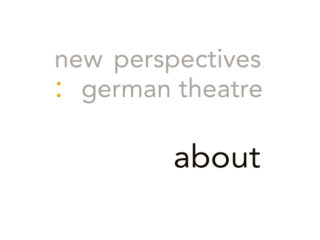