Two international festivals in Mainz and Berlin, celebrating and supporting the work of people with mixed abilities.

The charitable foundation Lebenshilfe GmbH was set up in 1958 as part of Germany’s new commitment to a compassionate and equal society after the Nazis had murdered more than 200,000 people with disabilities. With a mission to “represent the interests of people with intellectual disability and their family members, reject discrimination and social exclusion and campaign for acceptance, respect and recognition.”

Then in 1996, addressing a wish to “arouse public interest for the cultural contributions of disabled artists and inclusive art projects” Lebenshilfe Kunst & Kultur (Art & Culture) was formed. Directed by Andreas Meder, its primary activity is to organise festivals, events and projects across Germany, celebrating, debating and supporting the creativity and power of people with intellectual disabilities, as well as offering advice and assistance to others interested in doing similar projects.

Having run many festivals across a number of German cities over the intervening 20-plus years, Meder talks of his ultimate goal being his own obsolescence. In the meantime, he plays a key role in developing inclusion, equality and openness in theatre: “The festivals help to create connections, offering space and time for exchange. We bring people together.” When I meet with him in Mainz, the current festival is Grenzenlos (literally: ‘Borderless’), which has been running at the Staatstheater Mainz for several years now. “It’s important that more people come into contact with disability and one advantage of playing a Staatstheater is the established audience, some of whom are seeing work by artists with disabilities for the first time,” explains Meder, A point echoed by the theatre’s Chief Dramaturg, Jörg Vorhaben who sees the festival as a key fixture in their programme.

Grenzenlos (vol.19) is a celebration of both German and international theatre by people with mixed abilities. This year’s symposium – Epoch or Episode? – was focused on how much has been achieved over the past 20 years, exploring how the artists themselves might take on more creative control and how the future might look  through four scenarios ranging from the status quo to a vision of a theatre free from barriers, in terms of access and the creation of the shows as well as mainstream acceptance.

This ‘borderless’ programme doesn’t just cross geopolitical borders – although there were companies from Russia, France, Serbia and the UK as well as Germany – but also genres and forms. So, there was work performed and directed by members of inclusive company, Meine Damen und Herren from Hamburg, an experimental music project by German theatre collective, I Can Be Your Translator, a mixed ability ensemble version of a Shakespeare play from Bremen, a dance piece for 3-year olds from Scotland’s Indepen-dance and an exploration of the haiku from Russia’s Upsala Circus. As well as drama from Adhok, a French company of elderly people imagining a late renaissance as they escape their nursing home. And a testimonial piece sharing the experience of a life in constant pain from the UK’s China Plate. Even a lecture performance from Netherlands actor, Lucas de Man, asking how we might all live together in these times of change. And plenty more besides…

One of the German groups was Blaumeier-Atelier, a mixed ability company from Bremen with Der Sturm, a semi-devised version of Shakespeare’s The Tempest.

Stark trees lit in red and an ethereal soundscape set up the island. A soundscape to tantalise the characters, designed and led by Kevin Alamsyah, Blaumeier’s resident music maestro. The storm, brilliantly evoked with discordant brass, conjured by Ariel moving deftly, communing with the other spirits and cast members, fishing the story from the ether. Prospero playing lower key, referencing the character’s self-exclusion from society. And a terrific Miranda, the actor imposing her will as a person on the character and giving us a strong young woman who knows exactly what she wants – both in Ferdinand and in the acting decisions presented.

The casting of a physically disabled actor as Caliban was very powerful although it would have been good to see more of him – a counterbalance to Ariel, reinforcing the antagonistic relationship with Prospero. Shakespeare’s dramatic line remained clear with movement and music speaking more than words, intuition taking the place of the poetry. As a human experience, there were moments that were so emotionally powerful, they blew other versions off the stage.

Next day, chatting over lunch, the director, Imke Burma, explained this choice of play: “we were keen to try a Shakespeare. The Tempest has all that spirit stuff – presenting another consciousness – and there’s so much scope for music. But it’s also about human failings, which was quite a challenge for us as we usually focus on what we can do. The actors chose their own styles putting their own stamp on the characters – Miranda was keen to play with certain motifs, redefining female beauty – Marilyn Monroe – ‘peel me a grape’!”

Imke’s been with Blaumeier since leaving school. She used to go to workshops there and, keen to celebrate the creativity of everybody in society, returned after university to join the staff. We talked about the rehearsal process – “we start with improvisations and the piece slowly comes into being with everyone contributing,” says Imke. “Somebody says ‘Mmm, the coffee tastes like a glove’. You can play and work with such inventions.”

We headed off to a workshop run by Imke. The focus was using movement and sound as a universal form of communication. Starting with Follow-the-Leader, switch as you wish.  Then, in pairs, following each other, switching suddenly back and forth. Narratives emerged but were not required. Neither were they suppressed. Using the whole room and everything in it. Up and down, rolling and jumping, clapping hissing, laughing, shouting, dancing. Everything played a part in how we understood each other. Ending with a group discussion. The whole, giving a practical insight into Blaumeier’s process.

A few weeks later, another of Lebenshilfe’s festivals, the biennial No Limits took place in Berlin. Given the recent election result in which the far right AfD won 14% of the vote, it was hardly surprising that this one was more directly focussed on politics, the pamphlet for the symposium, Take Care, quoting Civil Rights activist, Audre Lord: “Caring for myself is not self-indulgence, it is self-preservation. And that is an act of political warfare.”

The programme included a remarkable dance piece, Disabled Theater from Zürich’s Theater HORA and French choreographer, Jérôme Bel. Something of a game-changer, this controversial show has played about 180 performances across the world, over the past 5 years and remains extremely thought-provoking and compelling.

There were also two shows addressing how we overcome the barriers to direct communication, in this case through sign language. The first opened the festival at Hebbel am Ufer (HAU), Berlin’s leading independent theatre – the semi-documentary Jeden Gest (Every Gesture) from the Polish Nowy Theatr.

A woman comes on stage and speaks to us in Polish in a high-pitched voice. She switches to sign language and is immediately more at ease, totally eloquent. The personal stories of the actors are presented. One had been forced to learn to speak by her mother threatening food deprivation until she mastered certain words. It was hateful, but it triggered speech for her… Another had grown up in a houseful of music and used to put his head against the leg of the piano to feel the music… They all disappear behind cardboard screens becoming disembodied sets of hands signing through holes. The show explores communication using mechanised hearing simulations, movement-based music sensors but most of all the fluidity and easy eloquence of sign language. Using all parts of the body, movement, energy, humour – there’s so much going on in a signed conversation, more than I, as a non-signer relying on surtitles, can fully appreciate. But what it does give me, is an intriguing insight into a different way of ‘hearing’ the world.

The second show is a drama about lying – very topical in this post-truth era. Luegen (Lies) from Munich Kammerspiele starts with two identical masked figures dressed in white spacesuits emerging from a misted botanical greenhouse. They face each other and slowly take off masks, suits, revealing their individuality. One turns out to be about a foot shorter in height. They start telling each other things about themselves. How much of this is true? How can they, we, tell? Does it matter?

We all need other signs – body language, personal energy, cultural context. The show focusses our attention on how we communicate: how much do we tell each other, consciously and unconsciously? And there’s an added element. One of the actors is d/Deaf. She speaks, but also lipreads and uses sign language and proceeds to try to teach these methods to the other, before they finally connect through music and dancing.

And at the end, we silently flutter our raised fingers in applause.

All of which offers myriad ways to encounter and understand our world, and each other. And ultimately, isn’t that what Lebenshilfe and its festivals are all about? 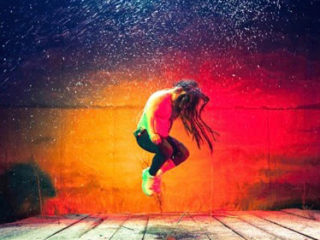 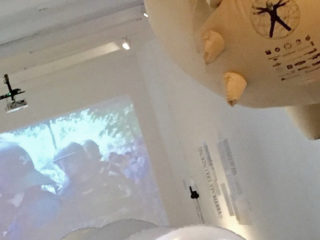