“Being special should be a normal thing, not always about provocation. The art will speak.”

Turning up at Theater Thikwa’s workshops tucked away in an old brewery building (as so many places in Germany seem to be), I find Gerd Hartmann, one of Thikwa’s two theatre directors taking in a bit of well-overdue sunshine. The building, he tells me, has a listed cellar, of historical interest because it was a site of weapons manufacture with slave labour during WW2. This Berlin history, it remains ever present. But a nice touch that it’s helping to protect companies like Thikwa from the big property developers currently moving in on the city.

Theater Thikwa is a mixed ability theatre company with a paid ensemble (‘the Thikwas’) of 44 professional actors with disabilities. The first professional mixed ability theatre in Germany, it was founded in 1990 by a group of people who were determined to get society to recognise the creativity of people with learning disabilities. “They’d been locked away in institutions, so society didn’t really see them. We wanted to make them visible and you don’t get much more visible than theatre,” says Gerd. It’s certainly paid off – their work is now amongst the most highly-regarded in Europe.

As we climb the stairs to the workshop, we pass a huge painting of an incredibly detailed imaginary city by company member, Torsten Holzapfel. A reminder that Thikwa isn’t just a theatre company – they also run a fine art studio and a full programme of professional training in movement, dancing, acting, painting, sculpture and more besides. And of course, the different disciplines all feed each other to make one big creative whole.

Settling down at a table in the bright, airy studio, surrounded by art, and indeed a couple of artists, Gerd explains that of the three big ‘inclusive’ theatre companies in Germany, two are in Berlin. He puts this down to the city’s complex political history. Both started up shortly after German Reunification, but they operate quite differently and follow different approaches. Thikwa identifies as Freie Szene and focusses on experimental work, and the other company, Ramba Zamba, calls itself a Staatstheater and tends more towards classic plays.

And let’s get this out of the way first. This term, inclusive. Gerd declares a frustration, “All these different terms – they stifle the debate. Let’s just do the work! Diversity, difference, is something that should be self-evidently accepted and valued. When we started up, many people didn’t believe that people with disabilities were capable of making art. It was our mission to show how wrong this was. Come and see, we said – look at what comes out if you are working together, creating together. We are a mixed ability company.”

“We offer a special quality,” Gerd continues. “The performers are present on stage in a unique way that opens up spaces of thinking and feeling in the minds of audiences and artists alike. Here at Thikwa, we’ve found that many prestigious artists want to work with us. It’s a new experience for them, it really broadens their artistic possibilities.” A similar idea to the impact on the audience of Disabled Theater – French choreographer, Jérôme Bel’s piece with Zurich’s Theater HORA – opening us up, challenging the ways of thinking we all take for granted. And sometimes discomforting us.

“Possibly the most controversial piece we’ve done is Dschingis Khan,” explains Gerd. “Monster Truck (a German experimental theatre company) collaborated with us and every politically incorrect cliché you could think of was on that stage. The show is playing with the absolutely no-go combination of the terms ‘mongoloid’ and ‘Mongolians’ and we kept the look trashy to reinforce the irony. Three Thikwa actors with Down’s Syndrome wore archaic ‘Mongolian-style’ dress and were exhibited as wild creatures in the human enclosure of the Zoologischergarten, like in the 1900s. [Back then, human exhibits in zoos were disturbingly common]. They responded to instructions given by the Monster Truck actors through radio earpieces. Then the tables turned and the Thikwa actors liberated themselves; dancing, telling their own stories, going into the audience, sitting on people’s laps… But they wore the earpieces throughout, so the audience could never be quite sure who was really pulling the strings.” Like the HORA/Bel piece, its proved enormously successful, touring all over Europe for several years.

Gerd’s been working with Thikwa since the beginning when he first turned up as a young theatre director, becoming artistic director in 2012. “I love the intensity, the unpredictability of the work,” he says, “your ideas are challenged by the actors, sometimes turned upside down – it’s always a journey of exploration.” They don’t do classics, preferring to play to their strengths, celebrating the difference and building their own shows using text-theater, performance and dance. “But it’s not about avoiding complexity” he says “the Thikwas really thrive on experimenting with complexity.”

So how far can this go? Like Theater HORA with their Freie Republik project, Thikwa have experimented with removing the hierarchy between non-disabled directors and disabled performers. “We did a show, Regie, which members of our acting ensemble directed.,” says Gerd. “They had complete control – deciding the show, casting, everything. We put out public adverts offering paid jobs to external actors and it was super-interesting to see how they responded to the directors. The process was fascinating, but the show itself didn’t really reflect the key questions arising in rehearsal about power and creative control.”

We move on to talk about how Thikwa engages with other companies, other countries. “We were in Korea last year, a co-pro in Japan at the Kyoto Experiment Festival and also in Russia, rehearsing abroad too. And a great achievement – especially bearing in mind that modern-day Russia is more like 1980s western Europe in terms of disability rights – my work with Russian mixed ability company, Kroog II Studio, won the Golden Mask [Russia’s most important theatre awards] for best experimental theatre piece of the year.” Thikwa have never been to the UK but wouldn’t be averse. “Your mixed ability theatre is more political,” he says, “maybe because you were Thatcher-poisoned. But you still want the same thing, to show people that diversity is a win-win situation.”

Closer to home, Thikwa attend festivals in Germany, mostly run by Andreas Meder at Lebenshilfe Kunst & Kultur . And in the past few years, some of the actors have been working with the ensembles of other theatres in Berlin – Deutsches Theater, GRIPS, Theater an der Parkaue – and increasingly for television. Is this the beginning of integration into the big ensembles, the ‘normalisation’ of the creativity of actors with cognitive disabilities that Thikwa and similar companies have been striving for? Gerd is cautious: “I’m not sure that total integration can really work as a vision,” he says, “Of course it should, but in practical terms the everyday circumstances are quite different, the normal life outside the rehearsal room. On stage it’s no problem, but our actors like the familiar space that they have here. I don’t know whether this is the future yet.”

So what does he think the future could be? “I would like that there will be more mixed ability work in every field. For now, I would like that our performers are fully accepted as professional partners in this process. But we have to provide support, and communication is an issue. We need to develop models in which this kind of work can function outside of a protected space like Thikwa.”

Meder talks of his ultimate goal being that his festivals are no longer necessary. His own obsolescence. “That’s a great idea,” says Gerd, “but sadly, he is still very much needed. And the opportunity he provides for us all to meet and discuss things is invaluable. More generally, festivals always want the controversial or provocative stuff – they’re not so interested in the other work. Always we have to prove our extraordinariness. We don’t want it all to be about provocation. It’s about keeping people together. Being special should be a normal thing – no longer a topic. The art will speak.”

POSTSCRIPT: (May 2018) Theater Thikwa have won the 2018 Martin Linzer prize which is awarded by German magazine, Theater der Zeit for excellence in theatre. In all theatre, not just mixed ability. Another indication that Gerd’s vision of acceptance could be really achievable. 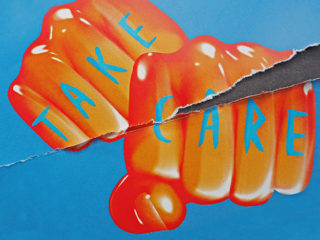