“Imagine you are dead. And that I, am at your funeral.”

So begins Arda’s story – addressing his long-absent father. “A loser who never came back from buying cigarettes and planting bombs.” A father now set up with a new family back in Turkey. An alien life as a political exile harder to bear than a Turkish jail. But for the family he left behind, German? Turkish? Who are they? What of their lives? “You could have called us. Just one call.”

Pounding repetition –  a drummer starts up a furious relentless rhythm. A man jumps and punches a light. As its shadow swings back and forth across the bleak faded set, a woman staggers, drunk, downstage to a vodka-stashed fridge, slamming the door on her dreams as much as the fridge. Again. And again. Life’s the same for everyone, isn’t it? “All of us in this world are just stupid fucking guest-workers.” You’re 8 years old and you try to stop your mother and sister fighting over cigarettes and money. You hang out with your mates, go to the club, dope in your sock, get beaten up by racists. And then one day … you’re EIGHTEEN. And now, you’re German – and Germany is paradise. Or so the bible says. You’re on your own, your whole life ahead of you.

Let’s take a look back. Where did you come from? Your folks – the night they met. Your mum, a symphony decked out in frothing pink, full of joyous possibility. Your dad, on the run, a lonely outsider hurling indifferent darts at a wall that couldn’t care. A shadow. An enigma. A glamorous prospect for a young girl on the brink of Life. The promise of escape from the trap of normal. The meeting imagined as a game show, a cabaret. Crackling with electricity. Attraction. This is exciting, full of promise. How can this go wrong? And as the record turns over, Arda watches and tells and slowly starts to sink until the drumming drowns him out… “Imagine you are dead. And that I am at your funeral.”

The specific meets the universal in this tale of two mismatched people from Turkey who’ve found themselves trying to make a life in Germany back in the 1980s – because of an earthquake, because of politics – and the subsequent impact on their children’s lives. Shifting to the wider world of forever and of right now, it’s that same story that never really seems to move on. People who’ve had to leave their homeland to start a new life somewhere else and their search for a way to live freely in another country, another culture. As themselves.

A great piece of writing by Necati Öziri, poetic and sharp with a rapping rhythm to crash it along. The whole, pulsing with life as Dimitrij Schaad bangs out the monologue at its heart, supported by versatile performances from other members of the Gorki Ensemble. A monologue with the hell directed out of it by Sebastian Nübling. Words, dancing, acrobatics, music, colour, noise, movement. Constantly changing pace, a rollercoaster as they say, of emotion. And of course we all know, it’ll never be alright. So alive, so angry, so … bleak. 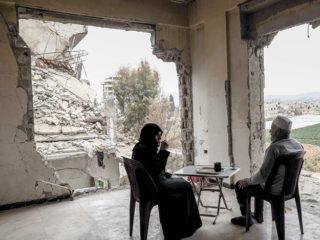 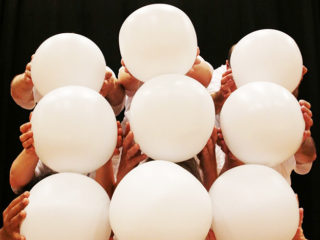